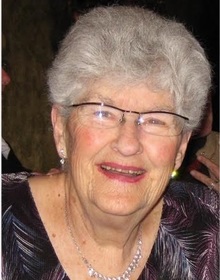 of Schenectady, 93, passed away at Kingsway Arms Nursing Home on Tuesday May 23, 2017 with her loving family at her side. Born in Oneonta, as the daughter of the late Carl and Alice (McGowan) Blanchard. She graduated from Mont Pleasant High School in Schenectady.

Being President of the Draper PTA kept Mrs. Allen community active. Marian was also active in the Rotterdam Boys Club, serving on the board as well as the ladies auxiliary for 30 years as its chair person. She was also instrumental in organizing the Boys Club Golf Tourneys and Charity Balls each year.

Marian was also an avid golf and tennis player. Furthermore, She was a member of the Lady Bugs League for over 40 years and the Schenectady Racquet Club.

The family extended a thank you to the Bellevue Wing at Kingsway Arms for their compassionate care of Marian.

Funeral Services for Marian E Allen were held Tuesday May 30, 2017 11AM at the Bond Funeral Home, 1614 Guilderland Avenue Schenectady. Also, A calling hour was from 10-11AM prior to the service.

Interment happened in the Evergreen Memorial Park in Colonie, NY.