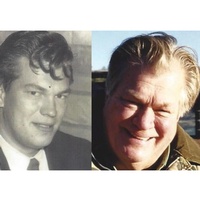 QUEENSBURY NY — Frank Arthur Kineke passed away on May 14th, 2018, just two days short of his 59th wedding anniversary. He was born in Amityville, NY, on January 8, 1935, to John and Helen Kineke of Bellmore, NY. He resided in Bellmore until his marriage to the one and only love of his life, Dorothy Wolff. Although they both graduated from Mepham High School, and both loved Jones Beach (he at the pool with his brother John, and she always at the ocean), their paths never crossed until a chance meeting at a local candy store. That night, he told his mom that he had met the girl he was going to marry. They were married on May 16, 1959, after he had served two years in the Army, stationed in Germany.

They purchased a home in Merrick, NY, where they resided with their daughters for 10 years. Frank owned and operated a successful auto body repair shop in Lynbrook, NY, and also worked as a bouncer at the Oak Beach Inn. In 1969, the family moved to Bolton Landing, NY, purchasing a small resort which they operated for 3 years. They then renovated and lived in a lovely home on Main St. There, Frank served at times as a Bolton Central School bus driver, captain of the Bolton Rescue Squad, president of the Chamber of Commerce and helped organize snowmobile races held by the Conservation Club.

In 1984, they moved to Queensbury to be closer to his office. They first lived on Mannis Road, and then he built their “dream home” on Big Bay Road, on the Hudson River.  For 35 years, he owned and operated his contracting business, Pro-Craft, Inc. He built many homes and created several neighborhoods in the North Country, including opening up Peggy Ann Road for development.

Frank’s desire to provide for his family was obvious, sometimes working 3 jobs at a time. The ability to provide aid to his employees also was important to him. If any of them had foreclosure problems, health woes, transportation issues, he was there to help out.

Frank lived life to the fullest and was able to complete his “bucket list” items. He had many interests. In early years, he was a familiar face at Freeport Speedway, garnering several trophies in his #5 “Tiger” car. Frank also loved piloting planes until diabetes forced him to retire. His big regret was that Dorothy refused to fly in a small plane!

Frank was a world class hunter with winning entries in the Safari Club International award book. He enjoyed hunting on many trips, including to Alaska, Africa, Scotland, Texas, Florida, Louisiana, Montana, and the Northern Territories of Canada. Although he had a trophy room at his home, he was not just a “trophy hunter”, as it was important to him to donate the meat to the less fortunate. He taught NRA safety courses and eventually became a master measurer for Safari Club International. He also was an avid fisherman, particularly enjoying game fishing in Key West, FL.

He is survived by his wife, Dorothy; 4 much loved daughters: Kathi DiMauro (Glens Falls), Dorothy Jones(Queensbury), Suzanne Kineke(Florida), and Dawn Marie Kineke (Queensbury); and 6 grandchildren of whom he was very proud: Jacey, Devin, Dylan, Jena, Marlayna and Connor. He is also survived by his sister Joan and his brothers John (Wilma), William and Edward, and several nephews and nieces.

Several years ago, Frank was diagnosed with Myasthenia Gravis, a nerve disease which attacked his muscles. He continued to work as long as he could, but it eventually forced his retirement. With the disease, his life span was longer than expected. He accepted his death with dignity, with more care for Dorothy than for his demise.

Services were private and beautifully handled by Baker Funeral Home.

Also, for their care of Frank during his illness, the family is forever grateful to the staff at Glens Falls Hospital including chaplain Sr. Donna, Indian River Nursing Home, and the Pines at Glens Falls, especially his favorite nurse, Lisa Harris.

Donations in Frank Kineke’s name may be made to the Myasthenia Gravis Foundation of America, 355 Lexington Avenue, 15th Floor, New York, NY 10017, or to a charity of one’s choosing.